The Circle: A Silken Thread

Always caught up in what they called
the practical side of life
(theory was for Plato),
up to their elbows in furniture, in bedding,
in cupboards and kitchen gardens,
they never neglected the lavender sachets
that turned a linen closet to a meadow.

The practical side of life,
like the Moon's unlighted face,
didn't lack for mysteries;
when Christmastime drew near,
life became pure praxis
and resided temporarily in hallways,
took refuge in suitcases and satchels.

And when somebody died--it happened
even in our family, alas--
my aunts, preoccupied
with death's practical side,
forgot at last about the lavender,
whose frantic scent bloomed selflessly
beneath a heavy snow of sheets.
Don't just do something, sit there.
And so I have, so I have,
the seasons curling around me like smoke,
Gone to the end of the earth and back without sound.

From Without End: New and Selected Poems
by Adam Zagajewski,
Farrar, Straus, & Giroux, 2002.
Electronic text via The Academy of American Poets

In February 2002, I received an email from someone who had stumbled across my Web site late one night.  (It was a much different Web site back then, but poetry was a primary focus.) The writer told me that after looking around on the site, "I freed myself from the net so to speak and started reading some poetry (Adam Zagajewski).  Well its nearing 5 now and I'm tired but feeling a subtle urge to toss some poetry I've been reading back into the void." At the end of his short email, he included this:

Madam Death, I am writing to request
that you kindly take into consideration
an extension of my liability to
the institution headed by you
for so many centuries.  You, Madam,
are a master, a violent sport,
a delicate ax, the pope, velvet lips,
scissors.  I don't flatter you.  I beg.
I don't demand.  In my own defense I have
only silence, dew on the grass, a nightingale
among the branches.  You forgive it,
its long tenure in the leaves of one aspen
after another, drops of eternity, grams
of amazement, and the sleepy complaints of the poor poets
whose passports you didn't renew.
- Adam Zagajewski

He (the mysterious emailer) tells this story much better than I do, but the simple version is that it took me exactly six months to respond to his email.  The whole six months, I kept it in my inbox, reading it from time to time, and imagining the kind of person who would send me a fantastic poem by (I now confess) a poet I'd never heard of.  His letter was short and impersonal but it sparkled, and I thought about how to write back with something that could somehow impress this stranger who'd thought enough to shoot a magnificent piece of poetry into my corner of the void.

When I did finally get up the nerve to write him back (eventually with a volley of Pablo Neruda) I was delighted to find that his interest in poetry seemed almost inexaustible.  For a few months, we exchanged bits of poems as we ran across them and commented on random topics.  Then, right around Christmas of that year, we just stopped writing each other.  But as it turns out, neither of us forgot those inspired exchanges.

After almost three years of silence, he wrote again, and this time it only took me a day to write him back. That fall, we met in person; seven months later, we married, and the morning of our wedding, I wore Guerlain Shalimar and gave him a hand-made anthology of poems to commemorate the day.  Instead of giving him a rose to wear on his vest that day, I sewed a rose made of red silk ribbon to his vest, and read him this poem:

The spider, dropping down from twig,
Unfolds a plan of her devising,
A thin premeditated rig
To use in rising.

And all that journey down through space,
In cool descent and loyal hearted,
She spins a ladder to the place
From where she started.

Thus I, gone forth as spiders do
In spider’s web a truth discerning,
Attach one silken thread to you
For my returning. 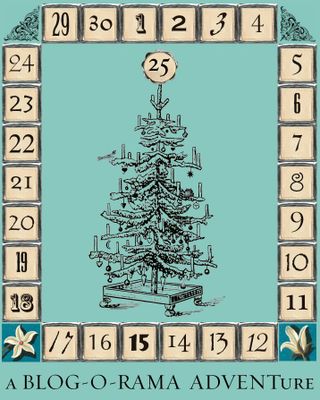 I tell you this story today because during the holidays we frequently have the opportunity to reflect on the cycles in our lives - the things we come back to over and over, the repeating patterns that in hindsight appear to give our thoughts and actions meaning.  As I was looking through some archived poems that I thought might be appropriate for this Holiday blog event, I stumbled across Mr. Zagajewski's aunts, and reading it brought a flood of recognition.  Personally, I am delighted to be aunt to two extraordinary little children, and though I wouldn't call myself exactly practical, I do hope that someday they'll remember me in a similar way as the poet remembers his own aunts - the kind of person for whom linen closets could be transformed into meadows.

And thinking about Mr. Zagajewski's poetry invariably brings me back to the moment I first became aware of the existence of a stranger from the distance who thought enough of me to trust me with a poem he liked. I don't exactly know where or how our circle came into existence but I do know that just at the right time we managed to find the path that would lead us towards each others.

Wonderful story. Very romantic.I love reading this. I also love the poem. Thanks for sharing! :)

Heather, oh how very romantic!! I love the intrigue you created in the telling of the story too.

What a deeply romantic story. Thank you for sharing some of your personal history. Toasting back to you Heather!

What a lovely story, thanks for sharing it.

And I love the poem, Natural History, by E.B.White, too.