perfume tourist
poems perfumes
Upcoming: The Perfume Inside the Poem
Mandy Aftel: Perfume in a Poem

Perfume in a Poem: In a Station of the Metro 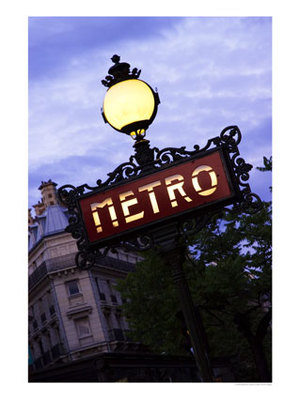 In a Station of the Metro

The apparition of these faces in the crowd;
Petals on a wet, black bough.

From Poetry, April 1913.  Online text via Poetry Foundation.  The current spacing of the text is from a later modification of the poem by Pound, published first in June 1913, and later in Pound's Gaudier-Brzeska: a Memoir, 1916. 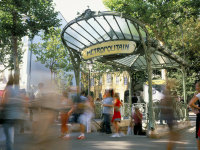 For some time now, I've wondered whether Ezra Pound's short, beautiful poem "In a Station of the Metro" had any potential as a perfume.  In twenty words arranged into three lines (including the title), he succinctly brings to life the vision of a particular moment in time. Pound's Metro vision has become one of the cornerstones of modern and contemporary poetry, for it is one of the poems on which Pound's concepts of "Imagism" and "Vorticism" are anchored.

In his 1916 book Gaudier-Brzeska: a Memoir, Ezra Pound explained his reasons for writing this poem:

beautiful woman, and I tried all that day to find words for what this had meant to me, and I could not find any words that seemed to me worthy, or as lovely as that sudden emotion....

"The "one image poem" is a form of super-position, that is to say, it is one idea set on top of another. I found it useful in getting out of the impasse in which I had been left by my metro emotion. I wrote a thirty-line poem, and destroyed it because it was what we call work "of second intensity." Six months later I made a poem half that length; a year later I made the following hokku-like [haiku-like] sentence: --

"The apparition of these faces in the crowd:

Petals, on a wet, black bough."

"I dare say it is meaningless unless one has drifted into a certain vein of thought. In a poem of this sort one is trying to record the precise instant when a thing outward and objective transforms itself, or darts into a thing inward and subjective.

Even though Pound himself saw "beautiful faces," one thing I've always loved about the poem is its ambiguity; the sense that the poet has seen something in a particular configuration, which itself is not human or industrial but is an experience without any particular value placement.  It's completely open to interpretation.

After having a conversation with a perfumer about the possibility of using a poem to create a perfume in which the color black was of importance, the first poem that came to my mind was Pound's little haiku-like sentence.

And then I wondered, if I were in a position to commission a fragrance and I did so by presenting the perfumer with this poem instead of a list of required notes and emotional qualities, what kind of fragrance might result?  How would some of my favorite artisans approach such a task?  How would their individual creative spirit show through in the resulting blend of aromatics?  What would each use as his or her "primary pigment," and how would a perfumer structure the blend to take advantage of some of the peculiarities of Pound's deceptively simple poem? How much would the blend differ from one perfumer to the next, and how might the poem become even more meaningful by adding these fragrant interpretations to those twenty simple words?  If numberless perfumers can come up with unique blends on the theme of "rose" or "incense," certainly this short poem would do as a possible starting point for a fantasy blend in which the cost of materials and production is unimportant and the only limitation is imagination.

I selected perfumers whom I admire for their dedication and for their obvious artistic sensibilities. Perhaps more significantly, I selected perfumers for whom I could find contact information, and whose perfumes I'd had a chance to wear and appreciate intimately.  Many of these perfumers are adept at more than one art form: some are writers, some are visual artists, and all have taken the time to craft a website we can visit in order to better understand their vision of art.  Some (like many poets) impose formal restrictions on their perfumes and I also thought this might be an interesting element in their interpretations.  In all cases, I suspected that these artists would have an understanding of expression and might be interested in the perfumery potential of a great modern poem.

I sent each perfumer Pound's verse and part of the excerpt from Pound's Gaudier-Brzeska: a Memoir quoted above, and I proposed the following:

You might think of it as a "perfume brief" from a client who only communicates in published poetry.  If you find the idea thought-provoking, perhaps you could send your thoughts on how you might go about creating this particular perfume, what notes you would be inclined to use, and how you feel your own individual artistic sensibility would be reflected in the final project. I'd be delighted with a few sentences or paragraphs; really - any participation at all would be greatly welcomed.

The answers I received were astonishing.  Each perfumer approached the project from a unique angle and several interpreted it with visual art as well as in the language of perfumery.  Several perfumers are dedicated to using only naturally-occurring aromatics, others embrace the broad palette of synthetic aromatics as well.  Seven of our perfumers even created real fragrances based on the poem, providing me with the inspiration for a wonderfully unique giveaway which will be explained shortly.

Over the next two weeks, I will honored to present to you, dearest reader, these contributions on the theme of Ezra Pound's "In a Station of the Metro" by the following distinguished perfumers:

On the final day of the project, March 31, we will give away an exquisitely rare and beautiful gift to one very fortunate reader.  Seven of our perfumers actually made the perfumes that they wrote about in this project.  These perfumes are not for sale and are experimental blends which are still "maturing" and may never go into production, and in each case the perfumer sent just one or two small vials to me as part of their contribution to the project.

Please join us tomorrow, March 17, for the first post in the series which will feature Mandy Aftel of Aftelier, with a unique look inside a perfumer's creative process as inspired by poetry.

"In a Station of the Metro" by Ezra Pound, from Poetry, April 1913.  Online text via Poetry Foundation. The current spacing of the text is from a later modification of the poem by Pound, published first in June 1913, and later in Pound's Gaudier-Brzeska: a Memoir, 1916.

Michelle: To have been given the honor of receiving samples of these scents was an almost unbearable joy for me. My inner dragon wanted to hoard them but once I decided to give them all away, I felt that I, too, was really a part of this extraordinary gift they bestowed on us all.

What a beautifully innovative idea! This is my kind of project. To be able to sniff the final creations would be a very lovely treat! Bravo!

sweetlife: Thank YOU for your constant encouragement.

perfumeshrine Are you sure you don't want to be in the drawing? It's a pretty sweet giveaway and you of all people could appreciate the rarity of some of these creations. Might even be a cool follow-up blog post in there! :)

Merline: C'est merveilleux! I think you will see some of those notes in upcoming posts!

Suzanne: It's been exciting for me, too, to follow along with Andy and others as they've sketched out their ideas. I feel very much like the world's greatest fan who just happened to sneak into the VIP area backstage!

Judith: Thank you for joining us! I've put your name in and hope you'll return for more throughout the next few weeks.

Jennifer: What a pleasure it is to have you here! I'm as excited as I can be and I hope you'll find this an enjoyable excursion through the imaginations of these gifted perfumers.

Capriccio: Williams indeed, and you're probably aware that Pound had particular influence in Williams' early work, though he later became even more of a "minimalist" than Pound. This poem, I think, shows Pound at his compact best. Williams, though, ah... what a poet.

Lavanya: I'm so happy that you stopped in and found something worth your time. I sometimes find that the best way at the "essence" of an idea is through an unconventional method; thought through sense, sense through imagination,... the possibilites are truly endless.

This *is* a beautiful idea! and one after my own heart- I am academically(and not so academically) interested in sensory perception and attention and find the interactions between various sensory modalities fascinating!!
I heard about your project from Andy's website as well as from Anya's natural perfumery yahoo forum- can't wait for the posts..:)The poem is lovely and very evocative..

What fantastic timing! Yesterday I was walking home and going crazy trying to remember which poet said, "no ideas but in things"--which I was thinking of because of perfume and how the juice carries all the ideas (in yesterday's case, Serge Lutens Borneo 1834). I had thought it might be Pound because of this poem, but it's William Carlos Williams.

I can't wait to see what they come up with.

Wow what an incredible reading experience this is going to be. I love the poem you chose for this amazing project into artistic creation.

This is a wonderful idea! Can't wait to hear about the creations--and, of course, I would love to win some of them!

Heather, congratulations to you! This is so exciting!

Like others, I've been reading about this project on Andy Tauer's website, as well as your own, and happily anticipating the start of this series. Finding out about your drawing is icing on an already splendid cake (oh, yes, I'd love to be entered!), so regardless, I'll be stopping back regularly between now and the end of the month. I wouldn't miss it!

I live in Paris so I know well our metro stations especially the crowded Odeon Station. Pound's Foto remind me on the library "Shakespeare & Co", Adrienne Monnier and James Joyce, when "Paris was a Fest" so as my trip to Rappalo in Liguria on his steps.
Your Projekt is very exciting and I've attending about all this perfume creation.
For fun I've tried to translate his sentence in french :

I had the pleasure of guessing the poem ever since I saw that Tauer drawing ;-)
Leaves pretty much to the imagination, anyway.

No need to ruin everyone's chances of winning, just wishing you good luck!

I can't wait to read these, and will be sure to comment early and often to increase my chances at that very beautiful prize. ;-)

Truly, Heather, you've done something very wonderful by gathering all these artists together to create something purely for the joy of it.