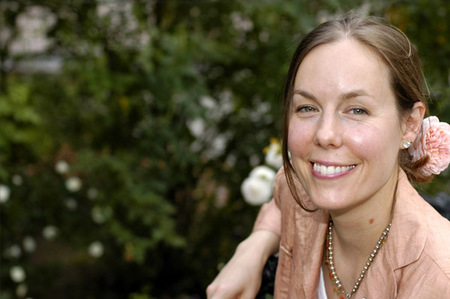 Ezra Pound: In a Station of the Metro

The apparition of these faces in the crowd;

Petals on a wet, black bough.

With my very idiosyncratic process, the words (the poem "brief") create an image or images, as if they were visual pieces. From there I begin to interpret what I see into fragrance form.  I don't really sense much difference between color, texture, line, 2-3 dimensionality, light, pitch, etc.  of subject matter and that of the fragrance.  They are all happening simultaneously and I feel that my part to play is as interpreter, and then as artist as I express the subject matter.  I will say that this particular "word-image" was more textural and value-oriented (light to dark) than linear or sculptural for me.  The colors were all quite muted and played a secondary role.

The feel of the poem is movement to stillness; a shifting from one thing to another and maybe to another and then to finally stop and BE in that final resting place.  It is a move away from the crowd and the noise of the Metro and a fall into oneself; into that personal, secluded place.

In my mind's eye, I felt a depth and darkness to the Paris Metro (which was a sort of sepia-tone) and then I felt the image shift to a sumi-e ink drawing  - all black, white and grey with feathered strokes and bleeding lines and finally into a charcoal drawing, (dark grey tinted with violet).  This last image is very soft and textural with faintly colored, glowing light petals on the page... like ghosts of a flower that was alive just moments ago.  The scene has shifted as well, from the Paris Metro to a sort of Zen garden. One way of feeling this poem - and the subsequent perfume - is as an emergence from dark (the underground Metro) to light (the faces and the petals) and another way of feeling it is as a movement from light (the energy of the city) to dark (seclusion and back to nature).  I love the paradoxical nature of the poem!

The resultant perfume must be a paradox.  It starts somewhat sharp and green and lively and then becomes quiet and isolated but expansive...atmospheric...and moody with ghostly shadows. In the end (through the drydown) there is near silence except for just a whisper. The perfume has a very "Modernist" feel, but not Modern (or Postmodern).  That is to say that it has a quality about it, due to it's composition, that feels historically like it could have been made as "chic Paris perfume" a during the first few decades of the Twentieth Century.  It is also artistically "Modernist" in its sense of belief in the man-made world while searching for the spiritual element inherent in the life experience. This, too, can seem paradoxical.  It has the smell of "wetness" and of streets, smoke, wood, a gentle flower garden, ink, and old books; there is Springtime and some Winter.  There is a sense of redemption and rebirth.

Dawn Spencer Hurwitz is a visual artist who began her exploration of perfumery over seventeen years ago at the famous ESSENCE perfumery in Boston while in art school.  Eventually, she bought ESSENCE and later moved her business to Boulder, Colorado, where her DSH Perfumes studio is now located.  In a 2006 news video produced by NewsTeam Boulder, Dawn explained the connection between her passion for olfactive and visual art:

"Designing fragrance and making a painting, or making another piece of art like a piece of sculpture or something, to me is the same thing.  I'm just utilizing another sense and I'm translating the criteria from one sense, if you will, to another." It is no surprise, then, that she interprets scent synesthetically as visual works, incorporating themes from literature, art, and her own experiences into a line that truly seems to have something to offer everyone.  The scope and depth of the DSH artisan perfume experience is immense. There are hundreds to choose from, including very accomplished recreations of designer perfumes such as Ambre Antique, Woodhue, and Royal Secret. Many of Dawn's fragrances have been praised in a wide range of media, including "O" - Oprah Magazine, Vogue, Natural Health, Real Simple, and People. Popular DSH scents on Makeup Alley include Minuit, Piment et Chocolat,   Cimabue (as reviewed on Now Smell This), Michelangelo, Cathedral, and Twelfth Night.

Though I've only tried a small fraction of her available blends, my firm favorite thus far is the Essence Oil Modern Iris.  This is not the melancholic iris of lost-in-the-attic perfumed powders, nor is it the clean, sleek, pruned iris of many contemporary confections such as Prada Infusion d'Iris. This is a strong, confident brushed-metal iris sculpture, damp with rain, radiating coolness and warmth at once.  Modern Iris is a deep, complex, and warm scent which frequently reminds me of a time many years ago when I sold perfume for a living but rarely wore fragrance myself.  Often, I'd seek relief from the constant attack of my co-worker's Yves Saint Laurent Paris fanaticism by retreating to the mens' counter.  Christian Dior Fahrenheit was usually my first choice.  After discovering Modern Iris, I could not understand why it reminded me of Fahrenheit until I looked up the components of each: they share bergamot, cedar, jasmine, musk, sandalwood, and most crucially: violet.  It's this darkened violet aspect of Modern Iris that most fascinates me, because I have only recently been able to pick out and appreciate violet notes more fully.

My next DSH sample set will almost certainly be the special collection called "The Perfumed Court," which was "created to illustrate 17th and 18th Century styles of fragrance with some as re-creations of perfumes that would have been worn by the luminaries of Versailles at the Courts of Louis XIV, Louis XV and Louis XVI." The inspiration for many of these fragrances was taken from the Elisabeth de Feydeau's A Scented Palace: The Secret History of Marie Antoinette's Perfumer.  These limited edition fragrances can be purchased in adorable charm bottles or luxury presentation flacons; both parfum and eau de toilette concentrations are available.

While creating her written contribution to this "Perfume in a Poem" series, Dawn found that simply imagining the scent would not be enough to satisfy her creative spirit:  she has begun production of this extraordinary perfume, which she will offer as a limited edition via the DSH Perfumes website.  Of course, the winner of our March 31 giveaway will also receive a sample of this inspired and poetic scent.

Please check DSH Perfumes often for more information on the release of her unique perfumed interpretation of Ezra Pound's "In a Station of the Metro." (We'll link here, too, once the fragrance has been released.)

All photos were provided by Dawn Spencer Hurwitz and are used with permission.

Comments are encouraged!  Please read the initial post in this series for the details on our extraordinary giveaway which will take place on March 31.

Posted by Heather on Thursday, March 20, 2008 in perfumers, perfumers on poetry | Permalink | Comments (28)

I wish I had accords of all of the different scents each perfumer is using. I would like to build them one by one along with the descriptions. This is fascinating. They all have such different visions.

Very interesting take I feel that I need to rekindle my passion for visual arts as I read Dawn's description to get a better grasp of the imagery... and what exactly does kukicha tea and sumi ink smell like?

Sumi ink! That's the note I've been waiting for, Dawn! Brilliant, perfectly brilliant. And thanks for making the fragrance for us, too --- I can't wait to try it!!