Anya McCoy: Perfume in a Poem 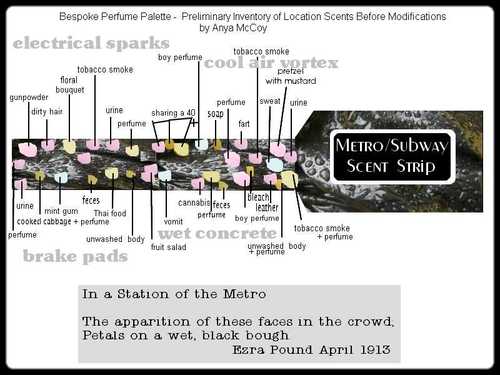 (click on the graphic above for an enlarged version)

Transport
On a Theme by Ezra Pound

Perfumes transport, trains transport: the movement, the moment of scent commingled, then dispersed.

This image came to me in a dream. When I awoke after the dream and researched Ezra Pound I found he started the Imagism movement in poetry, and it all seemed right.

I'd start with an image to show the reality of what those "petals" really smell like: crowds of notes on a wet, black scent strip representing the platform of the subway station where people gather.  I would then work on modifications to arrive at a perfume that would also incorporate the hot metal, the cool rush of air, brake pads, starchy friction, and wet concrete that are the basic universal subway smells.  The foul and the fragrant petals are but transitory elements in the unchanging dark wet tube of the transport realm.

When I first read the poem, my immediate thought was that petals on a bough are in a very precarious position.  Mental inventory - some can smell sweet, but some can smell like cat piss, like Duabanga grandiflora. With the first breeze, these petals are redistributed helter-skelter to "wherever."  Same with people on the subway: after the train arrives, they'll make their connections and surface out of the subway eventually. I have to wonder if that was a bit of what Pound was getting at.

My second thought was how subways have a stench intermingled with sweet smells and foodie smells. The urban subway of today contains people that are involved in the same daily activities as those of the early 20th century Paris. Who just kissed?  Who is bored? Who is full of food and wafting it out from both or either end?  Who perhaps just discharged a gun?  Intoxicated?  Homeless?  Eating on the platform?  Then--the smells are all redistributed with a big blast of cool air as the trains zoom past.

My training as a landscape architect is always brought into my perfumery.  I do a site inventory and analysis, noting the good and the bad.  After review by myself (or if it's a custom perfume, with the client) I begin the process of finding what to keep, what to eliminate, and what to reach for that was previously not considered.

I will first create the Preliminary Plan, known as a "Modification" in perfumery, for the perfume that I will call Transport.  I will bring yeasty/sweet scents with wheat and carob absolutes. A cistus absolute I have has a touch of the muddy puddle in it, and orange blossom water absolute will offer indole to mimic the smell of bacteria-scented gas, water, and a sweet floral. Ahhhh--sheer, sheer tobacco. Just a whiff of the pariah botanical will tease both those who love it and those who detest it.

Carrot seed absolute, tweaked in a special way, will give the rubbery gasket smell of brake pads.  And white cognac essential oil will sparkle--redolent of the headiness of beer and hinting at excess.  The rubbery smell, with a touch of dirty ashtray, may also need some specific tuberose absolute similar to the one used in Fracas. A fresh bouquet and some fruity ribbons will present themselves--the origins perhaps being boronia, osmanthus, and raspberry extract. Can I find a way to insert a bit of electrical crackle?  I will try. The electrical crackle will be part of the illumination: quick, transitory, and a bit dangerous.

The final perfume will transport the person as the train transports them from one smelling strip to another, changing the scent of the petals according to the demographic of the station.

Genius loci for the nose, transported.

Anya McCoy is an olfactory artist whose single-minded dedication to the art and craft of natural perfumery is legendary.  As the creative force behind Anya's Garden, she incorporates her lifelong passion for aromatics and more than fifteen years of experience as a perfumer into distinctive scents such as Pan, Fairchild, Temple, Kaffir, and Riverside. 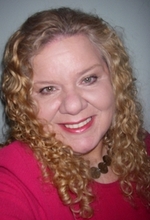 Perhaps equally important is her work as an educator, blogger, and correspondent within the world of artisan natural perfumery.  Anya is the president and owner of the Natural Perfumers Guild, whose "purpose is to gather and strengthen our existing community, increase public awareness and education about pure and natural perfumes, and establish standards of excellence in perfumery."  Since 2002, she has led the Yahoo Natural Perfumery group, which now includes 1500 members worldwide, and provides a platform for information exchange among natural artisan perfumers on all levels.  Anya is also one of the few perfumers who offers an extensive and rigorous online training seminar with an accompanying Natural Perfumery Primer for students.

As a trained landscape architect and former state-elected Soil and Water Conservation Manager in Florida, she has developed a particular inner relationship with the natural world which surrounds her, tincturing rare flowers from her own garden and restlessly exploring the natural world for its secrets.

"I've tasted soil to analyze it in class. I know why some soils are sweet and some sour. I also know why to use - or not use - an aromatic in perfumery for the same reason. If an aromatic is simply nice smelling, or something that reminds a client of their mother, I will not use it unless it accomplishes what it is meant to accomplish in the perfume."

Of her creative process, she speaks in visual terms:

"I always sketch or create a visual to use as a synchronistic springboard for a perfume, just as I did in landscape architecture. I design with my eyes and my nose and my dreamworld and my daily meditation. Then finally, I will I listen to my conscious mind. For Kaffir, I saw the scent in hot tropical blasts of aldehydes.  I saw Fairchild in the chaos and beauty after a hurricane, with clamshells and jasmine joined.  And in Riverside, I saw a sweet and romantic journey, finding the oasis in a desert."

My personal favorite from among Anya's beautiful, heartfelt compositions is the limited edition Temple, a scent which was conceived to encourage hope and to empower its wearer with a sense of focus and calm.  It is dedicated to survivors and in Anya's words: "It is hoped it will give courage."  Fifty percent of the profits of Temple will be donated to charities that assist people and animals via rescue efforts. 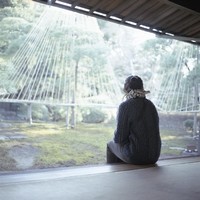 Although Temple is built upon a base of sustainable Vietnamese and Laotian agarwood (oudh) and earth tincture, it is anything but heavy or oppressing.  As others have noted, oudh can be a difficult note to wear, often bitter, but here it is blended with such careful balance that it perfectly centers the brighter, luminescent notes of orange, cassia, Ayurvedic herbs and spices, aglaia (Chinese rice flower), and borneol (an organic compound derived from plants and frequently used in traditional Chinese medicine).  Like others who have commented on Temple in various forums, I find this scent wholly comforting and extremely focused from start to finish.  On me, it is a serene fragrance, one that invokes quiet contemplation and genuinely captures the scent of an open-air temple--the ancient wood and paper screens infused with sweet incense and evocative of extreme stillness.  Wearing it, I am reminded of the reverence I sensed as I quietly wandered along wooden paths through an ancient temple complex in Kyoto, Japan, which I visited last January while my husband was living near Osaka.

Temple is available exclusively as a parfum extrait at 30% concentration.  Other Anya's Garden fragrances are available in parfum or eau de parfum concentrations and a sampler pack of Pan (my husband's favorite), Kaffir, and Fairchild is also available through Anya's website.

Anya not only rose to the challenge of this very unusual "Perfume in a Poem" project on short notice, she has begun development of the Transport scent (the first of its kind for her, as she is does not usually look to the lyric for her inspiration).  Not only will our March 31 grand prize winner receive a sample of this exclusive scent, Anya will begin offering it as a limited edition at Anya's Garden when the perfume has been finalized.  Transport will "only be available in a spray bottle, since air is the element of change in this poetic perfume."  Please return to Anya's Garden in upcoming weeks for announcements regarding this unique scent offering.  (We'll also link here once the fragrance is in release.)

And as a very special exclusive preview for readers of Memory & Desire, Anya announces that she will release two new perfumes by early Summer 2008: Moondance and Starflower, day and night variations on tuberose. 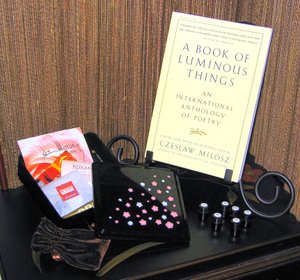 Metro Subway Scent Strip graphic, photo of Anya McCoy, and "Temple" photo provided by the artist and used with permission.

Comments are encouraged!  Please read the initial post in this series for the details on our extraordinary giveaway which will take place on March 31.

I am so fortunate to be taking the on-line Natural Perfumery course with Anya. I love the very systematic and visual diagram that helps us grasp the concept of Transport. Cannot wait to get my hands on some to compare the actual scent with that in my mind.

I am in love with that scent strip image! It reminds me of a Roz Chast cartoon...or some kind of concrete poetry.

Dear Anya, do tell us more about "boy perfume." Or do I want to know?

When I used to ride the local train every day we would have to wait for the express to come and go before getting started. As both of these trains traveled long distances, most people were waiting to take the express, and usually they waited on the local train where in the winter it was heated. This always gave me the feeling the train I was sitting in was some kind of waiting room that moves. And when the doors would close and we'd finally get started, I'd look out and imagine my silly old train was actually something out of the Jetsons.

Anya: I think your transport concept nicely gets at this weird experience we all know as spaces that move. What you do with your scent strip is to take it one step further and to show how the interior contents are also on the move. The "wet, black bough" may be an image of stability, but one can so easily imagine the next moment when the petals are aflutter from the demands of wind, rain, and yes, catching the express. Its great to see the anticipation of movement in the poem- like a film stilled on pause- developed like this.

Love the site analysis, the dream, the name. Transport.

Thanks Heather for this fabulous blog!

Again, a fascinating window into Anya's mind !
I can smell this from here- marvellous.
I'd be thrilled to have a good whiff of this one....