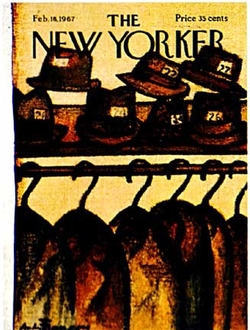 My Father's Hats
- by Mark Irwin -

Sunday mornings I would reach
high into his dark closet while standing
on a chair and tiptoeing reach
higher, touching, sometimes fumbling
the soft crowns and imagine
I was in a forest, wind hymning
through pines, where the musky scent
of rain clinging to damp earth was
his scent I loved, lingering on
bands, leather, and on the inner silk
crowns where I would smell his
hair and almost think I was being
held, or climbing a tree, touching
the yellow fruit, leaves whose scent
was that of clove in the godsome
air, as now, thinking of his fabulous
sleep, I stand on this canyon floor
and watch light slowly close
on water I can't be sure is there.

When Miller-Harris released L'Air de Rien in 2006, they made it clear that unique inspirations guided the composition of this fragrance.  The fragrance was created specifically for French actress and singer Jane Birkin, whose ideas and desires did not include the typical language of a perfume brief.  In a now-famous (among perfume enthusiasts) interview with British Vogue, Birkin discussed some of the elements she wanted in her fragrance:

[Birkin] had the idea for [L'air de Rien] when she was at her brother Andrew's house in Wales experimenting with a perfume lab he had created for his forthcoming film, Perfume. "I have never liked perfumes," she says. ... All the things usually associated with heady, dark-haired women like hyacinth, tuberose and lily-of-the-valley made me vomit when they were enclosed in a bottle so this one is much more me.  I wanted a little of my brother's hair, my father's pipe, floor polish, empty chest of drawers, old forgotten houses."

Imagine being so close to a member of your family that you want your signature fragrance to remind you of his or her hair.  I could not imagine this, but Jane's desire was so striking to me that I decided to learn more about her brother, Andrew Birkin.  He is the screenwriter of such films as The Name of the Rose (in which he also played a monk), Cement Garden/Zementgarten, The Messenger: The Story of Joan of Arc, and Perfume: The Story of a Murderer.  He is also an authority on and author of a book about J. M. Barrie, the creator of Peter Pan.  Digging further, I found that Andrew's son Anno was a poet and musician when he died suddenly in an accident at the age of 20.  Andrew maintains his son's website, www.anno.co.uk, with the kind of dedication and warmth that we might all wish for.  In reading about Anno and Andrew on the website I was moved by this remark in the Telegraph article by Jessamy Calkin:

It must have been something, growing up in this magical place, with a father like that. "If there is such a thing as reincarnation, I'd like to come back as one of Andrew Birkin's children," says Simon Williams. Jane warmly remembers summers in Wales with everyone racing around in the middle of the night on wild adventures, led by Andrew, having mud fights, water fights, playing Manhunt, which involved being chased through the woods - Andrew still plays that at 57. Bruce Robinson marvels at Birkin's rapport with children. "He's a sophisticated intellect, and always has been, but at the same time he can make gear shifts that I can't make, wherein he can be perfectly comfortable with kids at their level of functioning and do what they do - you know, rushing off to the woods with flashlights, whereas I'd rather be sitting in front of the fire with a bottle of red."

It seems reasonable enough that Jane would want to capture her brother in a scent, for he is clearly an extraordinary man.  But I did not know how directly her wishes had been translated into scent until I tried on L'Air de Rien for myself.  As Denyse Beaulieu has noted in her Perfume Shrine article on L'Air de Rien, "Never in a million years would I dream of smelling like Andrew Birkin's hair...his hair is not, frankly, his most appealing feature."  She goes on to explain, perfectly, why this fragrance works, a simple but mysteriously effective blending of oakmoss, musk, neroli, amber, and vanilla.

I don't know what Andrew Birkin's hair actually smells like, but the first time I tried L'Air de Rien, I understood perfectly why Jane included this strange request in her formulation.  The fragrance is very close, very strange, very soft in a way and hard to describe.  Like a loved-one's hair, it has an almost spooky quality.  It seems intimate and earthy, very human, and yet ethereal.  It's one of those fragrances that you just have to try for yourself - no one else will ever be able to describe it to you.

The proof of this - the need to try it for yourself - is in the very wide variety of conflicting reviews L'Air de Rien has gotten from those who have tried to love it.  Some declare it "poopy" and my own husband, whose tastes often run very close to my own, declared it "the nastiest thing I have smelled in a long time."  He elaborated by describing the stringy hair of an old dog.  When I insisted he try it on himself, he escalated his description to "Dog shit!"  I smelled my arm and then his; they both smelled wonderful to me - warm and slightly sweet, slightly dirty, but very sensual and not in the least bit offensive. He smelled us both and threatened to vomit.

So this is one fragrance that, out of concern for my husband, I probably won't wear around him.  (Probably.)  But it's so beautiful to me that it breaks my heart a little bit.  And this strikes me as the perfect way of describing those very human, very physical smells such as a father's hat, or a mother's shawl.

My own father is not of the generation that I imagine when I read Mark Irwin's poem "My Father's Hats."  I see a child of the fifties exploring fedoras and perhaps golf caps, imagining all the things that his beloved and mysterious father does while wearing those hats.  And I can imagine, too, the son who enters his late father's closet and experiences those same disembodied smells with a different kind of wonder and nostalgia. I try to imagine the poet's father, the scents of clove, pine, and leather that perhaps came from his aftershave, hair pomade, and sweat, or from some combination of imagination, longing, and love.

Nathalie Thank you - your description of Djedi makes me ache to try it! I know it's very hard to find, but I hear Vero Kern's perfume Onda is as close as we're ever likely to experience. I'm looking forward to trying Onda but I don't know if I'll ever have an opportunity to cry over Djedi.

Perfume Shrine I'm glad you stopped by! The next post will also contain links to your site, this time the Dior chypre series. L'Air de Rien may just become my ultimate "for me only" scent. And if I have just one of those, I think that's a perfect fit.

Thanks for the link to Perfume Shrine. :-)
I stumbled here searching for something and saw it.

I am very glad that our little "L'air du rien" cult is growing: it is a very individual scent to be sure and it's a pity your hub didn't like it. Be sure to keep some for your own time though. It's too good to be missed.

Once again a beautiful text Heather! I don't know L'Air de Rien, but I had a feeling very similar with Djedi de Guerlain, this perfume made me sad by its spooky beauty. I cannot really wear it because it is so beautiful and nostalgic it make me want to cry...

Divina - Hunger is fascinating, isn't it? Vinegar triggers hunger for me, without fail. I do wonder what they've done in L'Air de Rien that makes the range reactions to it so extremely unusual.

Ruth - I spend a lot of time reading poetry with an eye out for the sensual. I'm happy to know that this one struck a chord with you. Thank you for your comment!

Sweetlife - I am nothing if not a rabid researcher of tangents. I do think, though, that leaving L'Air de Rien on my husband's pillow would be equivalent to declaring war. He's never had this strong a negative reaction before. On the other hand, if this is the only fragrance I have to keep away from him in my collection, I'll be very lucky.

Ah, this was lovely as usual. I'm so pleased to have gotten that information about Jane Birkin's brother. How brilliant to have taken her comment seriously and followed up with research. Your sweetie's reaction is so strong--he might come around to the other side of the fence without knowing it. Maybe you could acclimate him slowly...leave a trace on his jacket, take a nap on his pillow after a spritz...

A brilliant piece pf writing Heather and I love that poem my Mark Twain, it's so ...sensual.
Thanks
Ruth

I love this one and I agree with you that it is very hard to describe. There is one quality that you touched upon though, that most seem to agree on (and I do too): its sense of intimacy. My partner doesn't like it either but it is not for that reason alone that I can't wear it too much and only give in when I really get a craving.. The reason is actually quite embarassing: L'air de Rien makes me .... Hungry! I know it's ridiculous, but it's the truth, unfortunately!