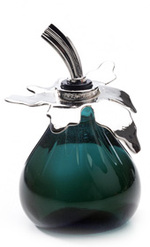 Once I believed in you; I planted a fig tree.
Here, in Vermont, country
of no summer. It was a test: if the tree lived,
it would mean you existed.

By this logic, you do not exist. Or you exist
exclusively in warmer climates,
in fervent Sicily and Mexico and California,
where are grown the unimaginable
apricot and fragile peach. Perhaps
they see your face in Sicily; here we barely see
the hem of your garment. I have to discipline myself
to share with John and Noah the tomato crop.

If there is justice in some other world, those
like myself, whom nature forces
into lives of abstinence, should get
the lion's share of all things, all
objects of hunger, greed being
praise of you. And no one praises
more intensely than I, with more
painfully checked desire, or more deserves
to sit at your right hand, if it exists, partaking
of the perishable, the immortal fig,
which does not travel.

---
Louise Glück's poetry is so fierce it scares me.  All the time.  Even the soft, candlelit ones I have to approach out of my peripheral vision.  In 1990 I sat at a table with several other aspiring writers and a well-established poet.  The poet opened a book and read one* of Louise Glück's poems,  but she didn't read the final two lines because by the time she got to them, she was crying.  This was a very professional, very self-possessed woman whom I'd known for two years without seeing a blip of emotion cross her face during a poetry class.  She cried in front of a small class full of undergraduate poets.  It was a defining moment for me in the development of my poetic tastes, though I didn't know it then.  I was already familiar with Glück but I hadn't been able to admit her to my brain.  I was in love with John Berryman and there was only room for him at the time. Plus, I was a little jealous.  I didn't want to like Louise; I wanted to be Louise.

With the accumulation of grief and joy, diplomacy and frankness, raw strength and weakness and resilience that equals growing older, I have found a window to Louise Glück.  I love the dark crevices, the moments of hate and elation.  She's able to shock me.  I love her mythic vision and her deadly use of plain language. There are poems that just cut through all the muck of the world and I am now finding that I cannot read more than one or two of her poems at a time because they overwhelm me.  Like my teacher years ago, I am perpetually poised at the edge of the table, one poem away from tears.

There are perfumes like this as well, ones that feel dark and familiar, ones that go straight for the heart and produce memories of a mythic nature.  Perfumers have occasionally done great things with the fig tree, and three of those creations are worthy of mention along with Ms. Gluck's powerful poem about the

L'Artisan Premier Figuier and Premier Figuier Extreme
...The very first perfume based on the fig theme. Green like its sweet-smelling leaves, milky like the sap of the tree, fruity like the soft flesh of the fig; woody like its branches and trunk…It is unique as it conjures up an image of the entire tree. (artisanparfumeur.com) Notes include:                         fig,  fig leaf,  milk of almond,  sandalwood,  coconut.

CB I Hate Perfume Revelation
"Revelation captures the scent of a Wild Fig Tree. The prime note is that of Fig Leaves Twigs blended with Honey and a touch of Spice. The perfume is based on a rich warm blend of Cedarwood, Cypress Wood, Amber. Revelation begins with a crisp green scent that gently warms on the skin to be sensual and glowing." (cbihateperfume.com)

Most people would not see the point in having three separate fig-themed perfumes.  But I'm with Louise Glück on this one: I want the lion's share, and there's a reason.  They are all fig, and they are all beautiful, and they are all distinctly different.  Diptyque Philosykos is a dark, woody-earthy concoction with just a tinge of light filtering through the leaves of a very full tree on a late summer evening.  It is a voluptuous woman covered in dirt from the garden, sweat on her neck and dried leaves gathering at the edge of the pathway leading down to an overgrown orchard.

In contrast, L'Artisan Parfumeur Premier Figuier is motherly.  It has a milky warmth and sweetness that reminds me of fig cookies and milk and a picnic on a quilt under trees.  Maybe this is what my mother smelled like when I was younger.  She occasionally took us on picnics at the local park and she always packed olives and cream cheese and ritz crackers for me. I smell this and I think of those picnics on mild summer days full of possibility

With Revelation, Christopher Brosius has attempted to pack an entire fig tree into a tiny bottle.  It starts off almost alarmingly sweet with a kind of sugary sticky greenness, but very soon the brittle twigs and earthy roots emerge on the skin. Revelation is undefinable for me, perhaps because I am so unfamiliar with the real thing. The only fig tree I have ever been around is the one my father planted for himself and has uprooted and carried at least once.  (His immortal fig did travel.)  I'm not sure if it's still alive but I suspect it is.  Revelation has the bitterness of raw, unripe figs.  It has the smell of that color, that textured green color and the exaggerated, curvy leaves.  This my father's fig tree, standing in the yard of the parsonage, cared for and curated by its pastor.  Revelation 6:13 "and the stars of the sky fell to the earth, as a fig tree casts its unripe figs when shaken by a great wind."

*The poem that made the poet cry was this:

When the stern god
approached me with his gift
my fear enchanted him
so that he ran more quickly
through the wet grass, as he insisted,
to praise me. I saw captivity
in praise; against the lyre,
I begged my father in the sea
to save me. When
the god arrived, I was nowhere,
I was in a tree forever. Reader,
pity Apollo: at the water’s edge,
I turned from him, I summoned
my invisible father—as
I stiffened in the god’s arms,
of his encompassing love
my father made
no other sign from the water.