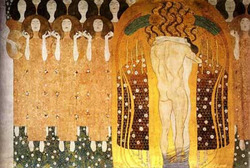 Maxine, back from a weekend with her boyfriend,
smiles like a big cat and says
that she's a conjugated verb.
She's been doing the direct object
with a second person pronoun named Phil,
and when she walks into the room,
everybody turns:

some kind of light is coming from her head.
Even the geraniums look curious,
and the bees, if they were here, would buzz
suspiciously around her hair, looking
for the door in her corona.
We're all attracted to the perfume
of fermenting joy,

we've all tried to start a fire,
and one day maybe it will blaze up on its own.
In the meantime, she is the one today among us
most able to bear the idea of her own beauty,
and when we see it, what we do is natural:
we take our burned hands
out of our pockets,
and clap.

"We're all attracted to the perfume of fermenting joy,"  that moment in which no matter what failures we have suffered, we fall headlong into the happiness of another.  I love the imagery of bees trying to break into someone's corona of inspiration.  I know that feeling.

Today I applaud the accomplishments of others who, like me, are perfume lovers and for whom that passion spills over into writing.  I was never a blog-reader before I became obsessed with perfumes.  Perfume writing is about the only kind of blog writing I can tolerate at the moment, and there is a lot of it out there to sort through.  There are many, many others who are worthy of notice, but there are only a few that bring me joy just because they exist.  This is the first post in a recurring series on exploration-worthy blogs, online writers, and labors of perfumed love available to anyone with an internet connection. Ladies and gentlemen, I present to you: Boomtown Boudoir.

I would not have known about this blog had I not seen it linked in a discussion about perfumes that make promises they can't deliver, which makes them (the perfumes, but sometimes also the promises) even more appealing.  I've greedily eaten up all the posts in the Boudoir archives and hope for more.  It's also a bit off the beaten path for a blog concerning perfume and it feels like my very own best-kept secret, so I'm glad to be able to share something that's not yet on everyone's blogroll, though I think it should be.

In her first post on April 11, 2007, she wrote "I’ve spent too much time messing around with all the various products designed to raise a woman from her ordinary life into a heightened state of glamour not to have accumulated notions of the critical variety on the topic. Particularly of interest to me is perfume. I first started dabbling with intent during my strip club days."  And from there she leads us through a succession of perfumed corridors such as the comforting but enigmatic soapy-soapness of Dial, vicious circles of nag champa, the freakishness of Miss Piggy, why stripper shoes are a lot more comfortable than they look, and the Feminism-meets-grandma's lap of Guerlain's Shalimar.  Without the knowledge or permission of the author, I probably shouldn't be so enthusiastically inviting you into the Boomtown Boudoir, but this is a bedroom I feel comfortable sharing with everyone.

"Steeping myself in my grandmother’s Jean Nate has had the effect of making me feel like kind of an asshole. For all the olfactory personas I have tried on, this one resonates inside me with one of the strongest presences I have felt from a perfume: this contradictory pull of self-disgust and unmitigated comfort. It’s as though Jean herself, with all her brisk, no-nonsense compassion, has simultaneously pointed out what a flawed human I am and always will be while giving me a hug."

"In the throes of an intense midsummer patchouli kick sparked off by Jovan’s Fresh Patchouli, I started craving the harder stuff, the pure shit, the bitter draught favored by unwashed anarchists and middle-aged artiste-type dudes with gray ponytails and a taste for underage pussy. But, you know, a light version."

"It smells of the seashell soaps collecting dust in someone’s maiden aunt’s powder room and ivory pantyhose and smug virginity, all tied up in a crisp pink hair-bow. It’s a fresh change of nylon panties trimmed with a little rose at the top every single morning before a breakfast of dry toast and frozen orange juice. It’s a young life dessicated by too much contact with the wrong type of older women: the ones who tell you that a tampon might compromise your hymen...Caleche stays sweet just like a good girl should. And frankly, I’m bored sick of her."

"You also get the feeling that this fragrance is the only knowable by-product of some intense, inarticulate, and private process that can only be sensed around its edges. Narciso Rodriguez for Her is that old abandoned industrial site that only you have seen at exactly the right angle, the right time of day, under the right set of circumstances to makes it look like it grew that way, out of the ground. It’s the unintentionally revealing expression on the face of a stranger that leaves you with a frozen-frame snapshot of what the word “solitude” really means. It’s a room that has existed for itself with no people in it for a very long time. It hits that lonely, ecstatic point of “hover” just right, that heightened state of relating to the world as an autonomous party that turns everyone into a secret photographer."

"Daim Blond instead performed something rather ugly and perverse on my skin that called to mind blinding white hospital corridors, antibacterial douche, and a mighty power struggle between good and evil not unlike that of Nurse Ratched and Randle MacMurphy in the Ken Kesey novel “One Flew Over the Cuckoo’s Nest.” And much like that story, in which a high-spirited mental patient who may or may not actually be crazy meets his match in a quietly castrating and power-hungry ward nurse, this perfume both dismayed and exhausted me."

"Back in my stoner days, I had some ideas about the qualities of a perfect drug dealer. ... I gave up smoking pot long before I ever found anyone remotely close to my ideal, so I still don’t know if such a thing even exists. Perhaps my perfect hippie-incense-and-white-flowers perfume is a similarly imaginary beast. It is also possible that I don’t actually know what I want, as I am ever hooked more on an auto-sensational head trip into the reserves of my own imagination than I am on actual perfume. It would be enough, I think, for something to sufficiently remind me of how it felt to sit alone in my first studio apartment, listening to Led Zeppelin and staring into space, pleasantly overwhelmed by dust particles floating on a beam of sunlight."

At least one reader hereof will find this tidbit interesting: I just noticed in re-reading the post of July 16 that Ms. Boudoir states her lineage includes Benedict Arnold, which probably makes her very close to my husband on the Arnold family tree.  Small world, or blogosphere wormhole? Six degrees or less? Either way, it's comforting to have evidence that there's a genetic tendency to wit and candor amongst the Arnold descendents.

Anyway, Ms. Boudoir, if you're reading this, I hope you're not offended that I pointed this neon arrow in your direction.  But I'm not taking it down.  Consider me a member of your fan club, complete with unauthorized fangirl blog post. I take my hands out of my pockets and clap.

Posted by Heather on Sunday, November 04, 2007 in best of blogs | Permalink