measured out in coffee spoons There was a woman in Ithaca
who cried softly all night
in the next room and helpless
I fell in love with her under the blanket
of snow that settled on all the roofs
of the town, filling up
every dark depression.

Next morning
in the motel coffee shop
I studied all the made-up faces
of women. Was it the middle-aged blonde
who kidded the waitress
or the young brunette lifting
her cup like a toast?

Love, whoever you are,
your courage was my companion
for many cold towns
after the betrayal of Ithaca
and when I order coffee
in a strange place, still
I say, lifting, this is for you.

Like many people, my first on-the-job activity most weekdays is pouring myself a cup of coffee.  I like a lot of cream and I prefer, in all its philistine glory, the powdered kind that's not really made of cream.  It has a nuttiness that I have always loved, and I can remember being as young as two or three and sneaking up onto the dinner table after everyone else had moved to another room.  I ate coffee creamer by the spoonful whenever I could get my hands on it.

So it's not a surprise that later in life, when I developed a taste for the coffee for which the creamer was intended, I took a real liking to cafe au lait and latte.  For those who might not be familiar with the difference, cafe au lait is generally half coffee, half warm milk.  A latte is one or more shots of espresso which is blended with steamed milk.  I love everything about the marriage of coffee beans and milk or cream.

I say all of this by way of introduction to a ritual I frequently perform when I visit a new coffee shop.  (Coffee lovers, like perfume lovers, frequently have little rituals involving their objects of desire.)  I almost always order a vanilla latte, sometimes with regular milk and sometimes I request soy milk (nuttier than regular milk, and for me a silent tribute to the nuttiness of powdered creamer).  My theory has been that if I order the same thing everywhere, I may not know who makes the best coffee but I'll probably find out who makes the best latte.

The winner from my travels thus far:  Gimme Coffee on Cayuga Street in Ithaca, New York.  In January 2006, they served me the very best vanilla latte I have ever had, it was creamy, it was rich, it was sweet but not too sweet, the quality of the espresso was magnificent, and the whole concoction looked gorgeous.  They practice latte art there, creating designs in the tops of lattes through the creative pouring of frothy milk.  The pictures you see here are not from Gimme Coffee, they are from a couple of coffee shops in Japan where this art is also practiced, but you get the idea.  If you love a good (and beautiful) latte, you must stop by Gimme Coffee.  It's worth the trip even if the great love of your life doesn't love coffee (as mine does) or live in Ithaca (as mine did).  NB: They do have other locations, too. For those who love more than just the taste of coffee, Gimme offers highly interesting and educational excerpts from their barista manual on their website.

Yes, as I explained to a friend this week, they do make "coffee perfumes," but who wants to smell like a big cup of stale Folger's, or worse, coffee breath?  The current trend in perfumery is to invoke little hints of familiar things without really smelling much like that thing itself.  Such is the case with two of 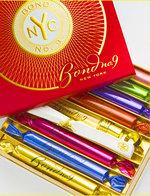 Bond No. 9's many New York-themed fragrances: New Haarlem and So New York.

I have to admit that I can't smell any coffee/espresso in So New York, even though this fragrance is said to be constructed around an espresso-and-milk accord that others have praised (or despised).  On me, it opens with at blast of big, sweet flowers and tart bergamot. If I hold my nose very close to the fragrance on my skin and keep it there, I can experience the entire life of So New York's chocolate/cocoa note over a span of about two minutes. Later, the flowers soften into a disarmingly creamy melange of patchouli and tonka bean.  For me, no espresso, no latte with a heart drawn in milk, but there is certainly the suggestion of the kind of cafe that carries the best chocolate gelati you've ever tasted.  A perfectly lovely fragrance that suggests gourmet pleasures without actually being foody at all.  So New York was created for Bond No. 9 by perfumer Laurent le Guernec.

New Haarlem, on the other hand, has a clearly detectable dose of coffee anchored in vanilla, amber, and patchouli.  On me, it is the perfume version of a perfectly bittersweet vanilla latte, it's sweet and creamy but it has an edge, an earthy/nutty texture that reminds me most of mocha pastries and coffee beans.  New Haarlem is utterly without gender.  It is dark, rich, and delicious and remains interesting hours after So New York has gone to bed.  I was not surprised to find out that New Haarlem was composed by perfumer Maurice Roucel, who also created the divine Musc Ravageur for Frederic Malle and L de Lolita for Lolita Lempicka, among other outstanding perfumes.

Other perfumed items that contain a coffee note include:

This poem is special to my husband and me for several reasons.  I sent it to him in an email before we began "seeing each other" in October 2005.  It struck a particular chord for both of us.  He lived in Ithaca, New York, at the time and we both loved (and still love) a good cup of coffee and a great poem.  The narrator shows a tenderness in this poem in his communion with those who have lost something dear but continue with their lives.  The motel coffee shop is the perfect location for this invocation, and nearly every time I order coffee in a diner, I remember this poem and lift my cup to both the poet and to my husband in gratitude for the moment at which love entered my life--at exactly the perfect time and in exactly the perfect way. [Edit: My husband and I also share appreciation for another poem about Ithaca, albeit a different Ithaca, by the Greek poet C. P. Cavafy. Helg at Perfume Shrine has recently posted it along with an audio/visual version on her excellent blog.]

Leonard Nathan was a master of short free verse.  Though he published 17 books, he was not as well known as many of his peers during his lifetime.  Former US Poet Laureate Ted Kooser has called Nathan "one of the finest poets of his generation." For those who love to love things that not everyone else knows about: take a look at Nathan's poetry.  In the words of UC Berkeley Professor Thomas Sloane, Nathan is "one of the most under-recognized and undervalued poets of our time." He passed away at the age of 82 on my own 38th birthday, June 3, 2007.

Poem: "Toast" by Leonard Nathan. From Carrying On: New and Selected Poems. University of Pittsburgh Press. Available at: http://writersalmanac.publicradio.org/programs/2004/02/09/index.html
Images: Lattes: author photos, January 2007, Japan.  The Bond No 9. Perfumista Box and fragrance samples pictured above are available via BeautyCafe and others.