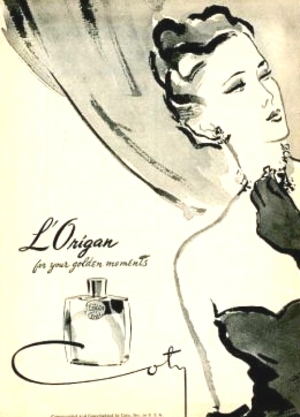 My mother's old leather handbag,
crowded with letters she carried
all through the war.  The smell
of my mother's handbag: mints
and lipstick and Coty powder.
The look of those letters, softened
and worn at the edges, opened,
read, and refolded so often.
Letters from my father.  Odour
of leather and powder, which ever
since then has meant womanliness,
and love, and anguish, and war.

One of my very first cosmetics purchases was a box of Coty Airspun powder.  I remember standing in the bathroom and trying, with nails bitten down to the quick, to remove the protective cellophane insert from the round, gold-and-white container. Just as I began to apply the fragrant powder to my 14-year-old cheeks, my father walked past the bathroom, stopped, came back, and looked at me with a faint smile.  "What is that?  That smells exactly like Bama."  Bama was the name our family had always called my dad's grandmother, legendary in our family for her elegance, beauty, talents, and charm.  My father's recognition of the scent felt like a compliment to me - first, he generally hated perfume, but this had not provoked protest.  My dad and I didn't get along very well at that time in my life, but here he was, associating my aromatic powder with a woman of whom not a negative word has ever been spoken in my family, quite a feat.

My father used to tell stories of Bama's "girls," other ladies of proper Charleston, South Carolina, society, whom Bama (somehow short for Marguerite Sophie) entertained in her front parlour.  No lady departed from those gatherings without an escort, often the little boy who would later be my father, to walk her home.  My father speaks of those escorting trips with a tone of pride - not for himself but probably for

the class and elegance that was rare even when he was a young kid running around the streets of Charleston.  To give you a sense of how legendary Bama is to us, I've heard that when she crossed a room, she did not move as other women move; she glided.  Despite her stout German frame and advanced age, her grace was unfailing.

And so, because my father gave it an identity, Coty Airspun powder has been a part of my make-up kit for over twenty-five years, though I almost never actually use it on my face anymore.  Its presence makes the whole process of daily face-management feel womanly.  Sometimes I simply open the box and inhale it as if doing so would magically add the finishing touches to the ritual.

What I didn't know when I was 14 is that my great-grandmother probably did smell exactly like Airspun - because she probably used it and perhaps even used the perfume with which it is scented, L'Origan de Coty.  I had the excellent fortune to acquire a tiny bottle of the vintage perfume through another collector and it is wonderful.  (For those totally unfamiliar with the scent - stop into your local drugstore, find the cosmetics

aisle, and open a box of Airspun.  I think it's sold in just about every drugstore in America and it's clearly a consumer favorite - it's been in production since at least the 1920s or 30s and is one of face powders on Makeup Alley with the highest rating as reviewed by site members.)  The fragrance is like walking into the past - a past of powdery sachets, white gloves, golden compacts, and elegant chapeau.

Reading Ruth Fainlight's poem was all I needed to run to my drawer and apply a few drops of L'Origan to my wrist.  The first few seconds are amazing, almost overwhelming, but soon its more subtle charms become apparent.  First released in 1906, L'Origan makes a dry and almost medicinally herbal first impression, followed by a rich bouquet of spicy clove and carnation, violet, jasmine, and neroli.  Very soon L'Origan enters a beautiful, golden, woody/powdery drydown, and slowly we are accompanied into the evening by charming and quiet escorts - vanilla, sandalwood, fine leather and musk.  Victoria at Bois de Jasmin has written a lovely review of L'Origan and notes that its originality lies in Francois Coty's novel use of then-new chemical odorants in

conjunction with natural materials. (Fragrance historian Octavian Sever has posted a very interesting "schema" of L'Origan's composition on his blog, 1000 Fragrances, for those who might like to know exactly what materials are involved.)  The result of Coty's chemistry experiment is sometimes called an "exotic floral" but in fact is the fore-runner to the modern "floriental" category.

Francois Coty was ahead of his time, not just in his ability to compose brilliant fragrances, but also in his approach to marketing.  The Musee du Grasse quotes from his business card: "Artiste, businessman, technician, economist, financial backer, [and] sociologist."  His marketing scheme for his perfumes was likewise revolutionary: when a prominent department store declined to sell his newly-developed creation, he discreetly dropped a bottle of perfume near the entrance doors.  The result was a commotion of women demanding to know what wonderful fragrance they were smelling.  The department store obliged them by taking

orders for Coty's fragrance.  Rene Lalique designed many of the original Coty bottles as well as the powder-puff design that has always been used on Airspun powder packages.  Though production has been discontinued, the modern version of the L'Origan fragrance is available through a wide variety of online discounters.  This version bears only a shadowy resemblance to its muskier predecessor.  If you're after the fragrance and can't find a good vintage bottle, the "modern" eau de toilette is feminine and pretty but has no trace of the animalic leather notes and dark musky bouquet that marks the drydown of the vintage version.

Modern perfumery owes a great deal to the innovative spirit of  Francois Coty, and in my opinion, the Coty company owes us a genuine reissue of its landmark fragrances such as L'Origan, Ambre Antique, and Chypre.  Historical reissues are becoming very popular in recent years with new/old offerings from Chanel, Robert Piguet, and others.  Until then, I'll enjoy my tiny bottle of vintage L'Origan de Coty parfum and imagine that this is the smell of elegance in a world which no longer exists.  As the poet Ruth Fainlight reminds us, it is not just the smell of elegance, it is the experience of womanliness, of longing, of love and anguish and of other things, too, that one cannot yet imagine as a child.  Any perfume that manages to get all that right deserves to be a classic.

Images: I've been collecting these ads for some time, but unfortunately I have not always noted where I got the images from.  Sources on the Internet include Parfumdepub, Becker Street, Adclassix, Enjoy Art, American Art Archives, Belles de Pub, and my own paper collection from vintage ads purchased through eBay.  My favorite is the first, which includes the advertising slogan in the 1940s:

My mom used Coty powder, it is beautiful, that along with Maybelines great lash mascara, pink bottle, green top. Classic and elegant

My mom used Coty powder, it is beautiful, that along with Maybelines great lash mascara, pink bottle, green top. Classic and elegant

Beautiful, Bela, and thank you for your visit and your comment. I haven't had the pleasure of smelling Liu or Rumeur, but I understand the disappointment of trying a fragrance that one remembers and finding it to have been changed, not for the better. Michelle Krell Kydd has published a beautiful post today at Glass Petal Smoke on memories of her mother's fragrance.

It is a pleasure to see you here, I hope you'll return.

I have a bottle of my mother's favourite perfume - Rumeur by Lanvin, the original - and I sniff it from time to time. Her first French perfume (she came from Poland) was Liu by Guerlain (she worked in a hospital, in France, when it first came out and a grateful patient gave her a small bottle of it. She unfortunately dropped it and she said the place smelled of it for weeks and weeks. Back in the '60s, when Liu, which had been discontinued, was relaunched, I bought her a bottle of it, but I think she was disappointed: it didn't smell as good as she remembered. She stuck to Rumeur.