exceptions to the rule 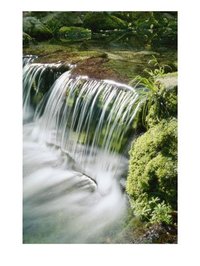 In personalities I like mild colorless people.
And in colors I prefer gray and brown.

My wife, a vivid girl from the mountains,
says, "Then why did you choose me?"

Mildly I lower my brown eyes--
There are so many things admirable people
do not understand.

I recently did a little experiment to chart the fragrances I like and where they fall in Michael Edwards' fragrance wheel.  I was not suprised to find a heavy concentration in the oriental, soft oriental, and floral oriental section; my absolute favorites almost all contain some combination of ambery, musky, spicy, and soft vanilla notes.  What did surprise me, though, was that I could identify only one "green" fragrance and two "water" fragrances that I like.  I wondered what one of those fragrances from the other side of the wheel would have to do to capture my attention.

Please forgive my Excel chart geekiness, but here's how the research came out.  Using the Fragrance 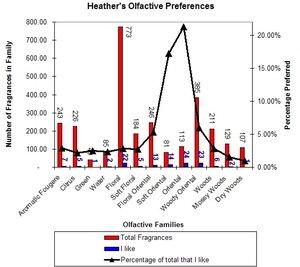 Foundation's directory as a guide, I intended to see A) How many total fragrances are listed in each category (the red bar in the graph to the right); B) Which of those fragrances I like (blue bar); and C) The relative proportion of my preferences measured against the total number of fragrances available in the category (black line).  The margin for error here is the fact that I've certainly not tried every fragrance in the list so my preferences may be over-representative of the kind of fragrance I'm more likely to try.  If, on the other hand, I were truly a "liberal studies" major in the academic world of fragrances, I would expect to like about the same percentage of fragrances in each category.  As you can see in the chart, that was not the case.

The results indicated that even though I like nearly the same number of "pure" florals as "pure" orientals (22 vs. 24), the percentage of oriental fragrances in all oriental subcategories was greater than my preferences in any other category.  Especially in the "green," "water," and "dry woods" categories, the stuff I like is pretty sparse - even sparser than the number of well-formulated fragrances within those categories.  Here is the short list of exceptions to my established olfactive patterns:

Guerlain Aqua Allegoria Mentafollia.  I had the fortune of finding a bottle of this at my local Marshall's discount store and purchased it unsniffed for $15 dollars or so.  I didn't particularly like it at

first - it was ok but a little too crisp, too grassy, too lime-green.  Fortunately, I didn't swap it out, because the more I have tried it the better I like it.  Now I find it transparent and fresh in a walk-through-the-woods way.  In a clear-spring-morning-when-the-grass-is-freshly-cut way.  It has the most unusual and interesting spearmint note I've ever detected in a perfume; one that doesn't make a mockery of mint and doesn't overdose the wearer in pepper and menthol.  I find Mentafollia smells more like a delicious chilled herbal tea.  It is crisp and lovely and a beautifully balanced fragrance.  I believe it's been discontinued, hence its widespread appearance in discount bins.  A pity.

So why this one green fragrance and no others?  I couldn't tell you.  Frankly, I was surprised to see that neither Prescriptives Calyx nor Annick Goutal Petite Cherie belongs to the green family.  Mr. Edwards classifies both as a crisp florals.  I've often wondered exactly what specific criteria he uses to place fragrances into this or that subcategory, and I'm no less mystified after my experiment.

Calvin Klein Escape (for women) .  I haven't worn or even smelled Escape in over fifteen years, but in the spring and summer of 1992 it was the only fragrance I wanted.  I was well on the way to making it my signature fragrance when I received a "hello" hug from someone I didn't like who complimented me profusely on the fragrance and seemed to look at me a little differently afterwards.  I quit wearing Escape immediately and was never able to enjoy it even in private because every time I smelled the sweet, peachy melon of its top notes, I thought of that slightly creepy encounter.  I loved it once, but the thrill is gone.

Creed Silver Mountain Water, on the other hand, is a fragrance I have only briefly tested and want to see more of.  I find it intriguing but I'm not sure it would be able to sustain my interest over time.  I love the slightly astringent but sweet black currant note at the top combined with the warm, comforting drydown

of black tea and peppery musk. It would probably smell wonderful on my husband, though.  I think he can successfully wear a much larger variety of scents than I can, and watery notes smell very "clean" and soft on him.  What is perhaps interesting is that even though these two fragrances are classified under the "water" family, I find them to be slightly fruity, sweet, and crisp in an un-watery way.  Maybe I just don't understand how water smells to a perfumer.

Hermes Bel Ami is my only friend in the dry woods category.  The Hermes website lists the component notes as cardamom, amber, patchouli, and leather.  The first half of that combination is a sure thing for me, but patchouli and leather can both turn sharp and acidic in my nose.  Nonetheless, I found Bel Ami

intriguing through various reviews and purchased it for my husband when he was still my boyfriend.  It's wonderful on him:  it smells like winter, like sharing a cup of spicy tea on the rug next to the fireplace while listening to Lionel Hampton punctuate the warm, bright notes of his vibraphone with ecstatic shouts of enthusiasm.  It's a big smile of a fragrance, though its occasional sharp dryness can be overbearing in the wrong weather.  It's probably the most "masculine" and moody of all my husband's fragrances, and I love that he can wear such a vivid fragrance with elegance.  I cannot.

Guerlain Jicky is perhaps my favorite anomaly.  It is a true fougere (from the French meaning "fern") in that it contains elements from each of the traditional olfactive families:

Personally, I have never been able to detect the skunky civet note that others either love or hate in Jicky.  For me, it is Shalimar's hot, androgynous older brother.  (Jicky was created in 1882 by Aime Guerlain; Shalimar in 1925 by Jacques Guerlain.) They share the same features in their initial crisp sobriety followed by what I perceive as a deep, ambery iris vanilla drydown.

But Jicky is exuberantly citrus at the top - fresh clementines and tangy lemon zest are just about all I can smell for the first three to five minutes.  Soon the herbal, clean lavender note develops.  Jicky may be the best lavender of all time, in that it doesn't much smell like lavender cologne but evokes an expanse of reeds, herbs, and wildflowers growing in the South of France.  Jicky's lavender, unlike most, wears well into the heart of the fragrance where a subtle melange of iris root and earthy vetiver anchor a perfect dose of quiet jasmine.

After an hour or two, the amber begins to glow, releasing a smoky veil of sweet benzoin and patchouli incense.  Others smell leather and civet, rose and tonka.  If they're in there, they are so well hidden that I can't possibly object.  I don't like animalic fragrances, I don't like fougere fragrances in general, I don't like rose and I despise any leather or patchouli that verges on bitterness.  Others have found Jicky guilty of those faults and if I only go by the other fragrances that I prefer, I should agree with them.  But I don't.  Jicky is magic.

Perhaps, in the end, what I like about all of these fragrances is the sweetness, the warmth I feel in them all.  This is probably the very thing I like about the oriental family in general, so it's no surprise that I'm able to find these notes in very disparate creations.  Perhaps, like the man in William Stafford's poem, I generally prefer things that I perceive to be like me.  And then I find things that I like against my own expectations.  The experience is thrilling, it is the essence of feeling alive.  It is discovery and beauty and the wonder of being stretched into a space I never thought I could occupy.