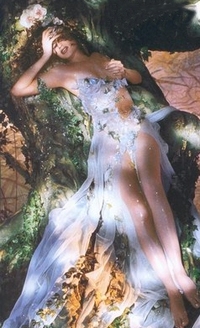 Under the rose-tree’s dancing shade
There stands a little ivory girl,
Pulling the leaves of pink and pearl
With pale green nails of polished jade.

The red leaves fall upon the mould,
The white leaves flutter, one by one,
Down to a blue bowl where the sun,
Like a great dragon, writhes in gold.

The white leaves float upon the air,
The red leaves flutter idly down,
Some fall upon her yellow gown,
And some upon her raven hair.

She takes an amber lute and sings,
And as she sings a silver crane
Begins his scarlet neck to strain,
And flap his burnished metal wings.

She takes a lute of amber bright,
And from the thicket where he lies
Her lover, with his almond eyes,
Watches her movements in delight.

And now she gives a cry of fear,
And tiny tears begin to start:
A thorn has wounded with its dart
The pink-veined sea-shell of her ear.

And now she laughs a merry note:
There has fallen a petal of the rose
Just where the yellow satin shows
The blue-veined flower of her throat.

With pale green nails of polished jade,
Pulling the leaves of pink and pearl,
There stands a little ivory girl
Under the rose-tree’s dancing shade.

When the man who would become my husband first smelled this perfume, he remarked that it was the best name/scent match he'd ever come across. I haven't asked him exactly what he means by that, but I think he had just finished re-reading Vladimir Nabokov's Lolita. For me, Lolita Lempicka (LL) is whimsical and mischievous, unintentionally erotic, but not necessarily nubile.  Not even necessarily human.  The packaging and advertising for LL makes the most of its ethereal fairyland qualities.  Purples and lavenders swirl around a silvery dark-haired forest nymph.  She's part Sleeping Beauty and part Morgane le Fay.  Wilde's little ivory girl has "pale green nails of polished jade" and that is exactly the image that connected LL with Le Panneau in my mind.  Lolita may be violet and licorice-colored, but she certainly has green fingernails.

Basenotes describes LL's composition in notes of ivy, anise seed, violet, amarise, licorice, amarena, vetiver, tonka bean, vanilla, and musk.  It is sweet and sharp and even a little aggressive on me.  I have to be considerate of the dosage; otherwise I feel like I was just dumped from a licorice factory.  Visions of Willie Wonka ensue.  Sparingly applied, this fragrance swirls with color. From the falling white leaves to a golden dragon, it's all there, even the metal-winged silver crane with a scarlet throat. Her raven hair swirls around an amber lute as she plays a tune both tender and alluring.

The text of "Le Panneau" was also set to music (piano or harp) in 2006 by composer Gary Bachlund for soprano Alexandra Wilson.  More information is available at: http://www.bachlund.org/Fantaisies_Decoratives.htm

And one more curiosity:   panneau translates to "sign," "panel," or "notice."