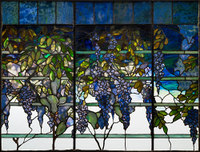 The first purple wisteria
I recall from boyhood hung
on a wire outside the windows
of the breakfast room next door
at the home of Steve Pisaris.
I loved his tall, skinny daughter,
or so I thought, and I would wait
beside the back door, prostrate,
begging to be taken in. Perhaps
it was only the flowers of spring
with their sickening perfumes
that had infected me. When Steve
and Sophie and the three children
packed up and made the move west,
I went on spring after spring,
leaden with desire, half-asleep,
praying to die. Now I know
those prayers were answered.
That boy died, the brick houses
deepened and darkened with rain,
age, use, and finally closed
their eyes and dreamed the sleep
of California. I learned this
only today. Wakened early
in an empty house not lately
battered by storms, I looked
for nothing. On the surface
of the rain barrel, the paled,
shredded blossoms floated.

We Southerners just love to go on and on about wisteria.  It is beautiful, it is fragrant, it is sometimes overwhelmingly sickening.  I have heard that the wisteria fragrance only sinks, never rises.  If you are standing on a balcony above the flowering vine, you won't smell it unless the wind brings the fragrance to you.  However, if you're sitting beneath wisteria you will certainly smell it.  You may even have to move in order to breathe properly.

Perhaps all purple flowers contain an element of reflective melancholy.  I'm reminded that "The Waste Land" opens with lilacs mixing memory and desire.  And it's often been noted that irises can lend a very somber, serious note to perfumes that might otherwise blind us with brightness.  Whatever the case, you will find that in a great many poems, wisteria signifies as much a sense of loss as a sense of wonder.  It's a great flower for posing a childhood memory against an adult realization.  Time can heal wounds but sometimes a tendril breaks through and shocks us with the presence of our previous selves.

Probably the best wisteria-scented fragrance I've ever come across was Fresh Index Wisteria.  It has been discontinued and is very difficult to find.  I haven't found a wisteria that's true to the flower.  Many of them are sickening, though, so that part must be relatively easy to get right.

Like many beautiful things, wisteria's usefulness is a matter of perspective.  Growing over a trellis, it's a common ornamental vine and can almost single-handedly transform a boring overhang into a picturesque garden.  It's not always this well-behaved, though, and can strangle a tree or bush within a few seasons.  In winter, wisteria will look ugly and ragged, but wait until the "bright fluttering" of spring.  Petals cascading like grapes will explode into bloom.  Bring your glass of sweet tea out and spread a blanket near (but not too near) the perfume.  It will find you.

Perhaps it is possible
to be gentle no matter what, to seek not restraint
but surrender entirely, to turn
from the snarling reproach not into the keening
dismissal of hope but to whatever bright
fluttering is next, the bright fluttering
of wisteria petals, a felicitous
phrase, fingers touching
a face. ...
- From "Fuschia" by Charlie Smith -

A long time ago, this was the title of a hornbook for tots. I suppose you knew that.

Thanks for the great info. The Memorie di Venezia sounds lovely - I'll need to find a sample.

Very interesting observation, Lauren. I had to go out and buy a package of grape Kool-Aid tonight just to remind myself what it smells like. I have to say that if any of these perfumes smelled a little more like grape Kool-Aid they'd probably be more wearable but I think they would all disappoint you, with the possible exception of Bulgari Blv, which to my nose smells nothing at all of wisteria but does have a sweet/tartness that is interesting. You might like Adrienne Vittadini's Memorie di Venezia, which also contains a wisteria note along with lemon, redcurrant, waterlily, and violet plum. It's light and slightly fruity with a pronounced tangy top note. On the other hand, you might enjoy Thierry Mugler's Alien. "Grape soda" were the first words out of my mouth when I tried it for the first time. I don't think the TM counter salesperson was terribly impressed with my review. Other scents I've seen mentioned in the same sentence with grape Kool-Aid include: Child perfume, Christian Dior Poison, Victoria's Secret Love Spell, Crabtree & Evelyn Sonoma Valley (fig, grape leaves, nectarine, mimosa and wisteria), Versace Metal Jeans (Men), and Philosophy Grape Popsicle 3-in-1. The latter two have been discontinued, I believe. Thanks for your response!

I always think wisteria blossoms smell just like grape Kool-Aid. Do any of the perfumes listed smell a little like that?