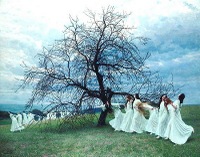 I have a friend
At the end
Of the world.
His name is a breath

Of fresh air.
He is dressed in
Grey chiffon. At least
I think it is chiffon.
It has a
Peculiar look, like smoke.

It wraps him round
It blows out of place
It conceals him
I have not seen his face.

But I have seen his eyes, they are
As pretty and bright
As raindrops on black twigs
In March, and heard him say:

I am a breath
Of fresh air for you, a change
By and by.

Black March I call him
Because of his eyes
Being like March raindrops
On black twigs.

(Such a pretty time when the sky
Behind black twigs can be seen
Stretched out in one
Uninterrupted
Cambridge blue as cold as snow.)

But this friend
Whatever new names I give him
Is an old friend. He says:

Whatever names you give me
I am
A breath of fresh air,
A change for you.

I spend a lot of time browsing perfume sites, reading descriptions, looking at bottles, imagining what the perfume notes "oxygen," "ultimate fusion" and "flaming rock" might smell like.  Occasionally I find a concoction that stupefies me with its post-postmodernism, such as Comme des Garcons Series 6: Synthetic - Tar which contains the following list of perfumery unimaginables: "town gas, vapours of bitumen, bergamot, earth notes, opoponax, styrax, grilled cigarettes, pyrogenic notes."  I love bergamot, opoponax, and styrax.  But grilled cigarettes and town gas?  Really?  The people at Comme des Garcons (in Japan) clearly see perfume as a sort of sculpture, and whether it pleases or shocks, the intention might just be to do anything as long as it's not boring.

On the same site (Lucky Scent) I spent some time looking at the perfumes from Christopher Brosius' line CB I Hate Perfume.  I dismissed this line some time ago as a sort ultra self-conscious attempt at ironic humor, but I'm not so sure anymore.  I still haven't actually smelled any of the perfumes from this line, but Brosius' previous venture at Demeter Fragrance Library was notable for its ingenuity (although not for the staying power or complexity of its fragrances) with offerings such as Dirt, Snow, and Holy Water.

One of the newer offerings from CB I Hate Perfume is from the CB Metamorphosis line and is called M#2 Black March; it was inspired by the Stevie Smith poem of the same name.  From the perfumer: "I have thought about a perfume that reflects this poem for years.  Now, it's finished. Both the poem and my perfume contain a secret that you must discover for yourself."  Notes listed on Lucky Scent include: rain drops, leaf buds, wet twigs, tree sap, bark, mossy rare earth and the faintest hint of spring flower bulbs, as pretty and bright as rain drops on black twigs in March.

From reflecting on the poem before reading the list of notes, I expected iris root, smoky incense, lichen, and possibly some ozonal airy/aquatic notes.  What really intrigues me about the actual notes listed is that  "spring flower bulbs" bit, which to my memory, can only mean "dirt" but maybe not in the dirty way.  More in the playing in Grandad's garden way.  Columbina over at Perfume Smellin' Things wrote a fascinating review of Black March, well worth reading, which seems to confirm my hunch.

I must admit I'm not a big fan of fragrances as unwearable postmodern sculpture.  But Mr. Brosius has sold me with his invocation to the late Stevie Smith, a wondeful poet whose poems frequently amaze me. I will order, straight from the CB website, a 2 ml sample of Black March perfume absolute (the sample size is not available at Lucky Scent).  I will wear it if I can stand it and think about it and give thanks for a perfumer who had the balls to base a modern perfume on a modern poem.   Perhaps I will share my experience here...although, I do love secrets.

Hi Lauren! This may just be the inspiration that I needed in order to cross over to the sculpted scent world. Cradle of Light is also at the top of my "to smell" list, along with Memory of Kindness, In the Summer Kitchen, and Winter 1972. Even more alluring, for me, is his collection of accords. Particularly the "skin" collection and the one under "chemical" titled "You Know This." Sounds ominous and possibly thrilling. Although it is in the same category as celo tape and crayon, so it could be anything. Freezerburn? Microwaved Aluminum? Magic Marker?

I love this poem and CB I Hate Perfume Black March. I never wear it - it's just not what I want to smell on my wrist all day - but I keep it and Memory of Kindness, In the Summer Kitchen, and To See a Flower to sniff on the days in late January that are long on cold and ice but short on daylight and dirt. They're a reminder that spring is on the way when it seems far away.

I would love to try CB's Cradle of Light, next!