a pair of pears 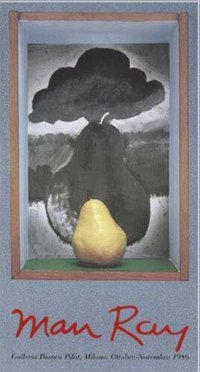 1
Opusculum paedagogum.*
The pears are not viols,
Nudes or bottles.
They resemble nothing else.

2
They are yellow forms
Composed of curves
Bulging toward the base.
They are touched red.

3
They are not flat surfaces
Having curved outlines
They are round
Tapering toward the top.

4
In the way they are modelled
There are bits of blue.
A hard dry leaf hangs
from the stem.

5
The yellow glistens.
It glistens with various yellows,
Citrons, oranges and greens
flowering over the skin.

6
The shadows of the pears
Are blobs on the green cloth.
The pears are not seen
As the observer wills.

I am a huge fan of Luca Turin.  Well-known to most perfume bloggers, Turin is a fragrance designer and biophysicist at Flexitral, a company that manufactures aroma molecules.  He is also the subject of the excellent Chandler Burr book The Emperor of Scent: A True Story of Perfume and Obsession. Reading Burr's book was one of the things that really turned me on to the wide world of perfumes.  By "wide" I mean the perfumes beyond the borders of what I thought I could like.  Turin is particularly talented at describing fragrances and aromas with elegance and wit, which is one of the reasons his perfume reviews are so adored by fans of perfume.  (Turin writes a monthly column for Swiss magazine NZZ Folio and is also working on a new book of perfume reviews with co-author Tania Sanchez.)

When I first read Emperor a few years ago, I already had in my possession a small bottle of Annick Goutal's beautiful Petite Cherie, which to me smelled of a balmy, breezy morning in a grassy field.  The grass green notes intrigued me and always made me feel like I was wandering in a freshly-mown meadow.  It is easy to imagine oneself dozing on a soft quilt under a shady willow when wearing this fragrance, and as the fragrance develops on the skin, it gets easier and easier to imagine all sorts of naked frolicking on that quilt.

But it wasn't until I read Emperor of Scent that I realized the faintly sweet undertone to what I had been smelling was actually a pronounced overtone: pear.  Turin, via Burr, describes Petite Cherie as "a lovely super-pear" and goes on to explain that:

Goutal chose from pears (at least 150 molecules make the subtle difference between the scent of a William pear and other varieties; Goutal keeps this molecule secret).... And then Petite Cherie has natural vanilla from the island of Reunion, several natural peach molecules, and natural cut grass, which is to say the molecule that you get the second after you cut the grass but which disappears immediately. (p. 249)

Really, I had no idea one pear smelled different from another, and until it was pointed out to me in the book, I didn't even realize that pear was one of the main reasons I loved Petite Cherie but there it was, plain as could be once I knew what I was smelling.   This experience is what led me to try my own hand at writing perfume reviews (primarily on Makeupalley.com) and I soon found that my ability to write was seriously limited by my ability to discern smells.  I've never been one of those people that could pick the "hint of oak" out in a bottle of wine and I certainly can't tell the difference between the smell of different varieties of the same fruit.  I can taste them, but that doesn't always help when thinking of perfumes.  I came to the conclusion that where other writers can eloquently and accurately describe "smoke and resin accords that oscillate between dark roasted lapsang suchong and rubber"** I smell "creamy darkness" in Bulgari Black.

I think my sense of smell is more visual - I have no idea what I'm smelling but I can often associate it with a memory.  Perfumes are particularly atmospheric for me.  And so, though Luca Turin argues in his most recent book, The Secret of Scent, that fragrances are not about memory, I have to disagree.  I think fragrances are about imagination, and memory is an integral part of fantasy.

All this is to say that Wallace Stevens is exactly right - pears are not nudes or bottles, they resemble nothing else.  But describing the scent of a pear is completely impossible except by metaphor and analogy.  Like stanza five, the yellow pear of Petite Cherie glistens and flowers over the skin but in another, less elegant formulation (or to a less sensitive nose) the pears could simply amount to blobs on a green cloth.  You won't see or smell or taste pear the way I do, which is why it could evoke for one person a breeze through a willow tree and for another, it might be the essence of "eating peaches on the Black Sea beach"** with one's grandfather.

Even from one pear to the next, there will be surprise.  Try Jean Patou's Sira des Indes, a visually gorgeous gourmand fragrance the color of a ripe apricots which smells both classy and dirty. Sira is only distantly related to Cherie, and each gains it's own life on the skin - these are not pears as you thought you understood pears. This is the imaginative genius of the perfumer.

*In the first line of the poem, Opusculum Paedagogum refers to "a little work that teaches."
** Description of Bulgari Black and Petite Cherie by Victoria of Boisdejasmin.